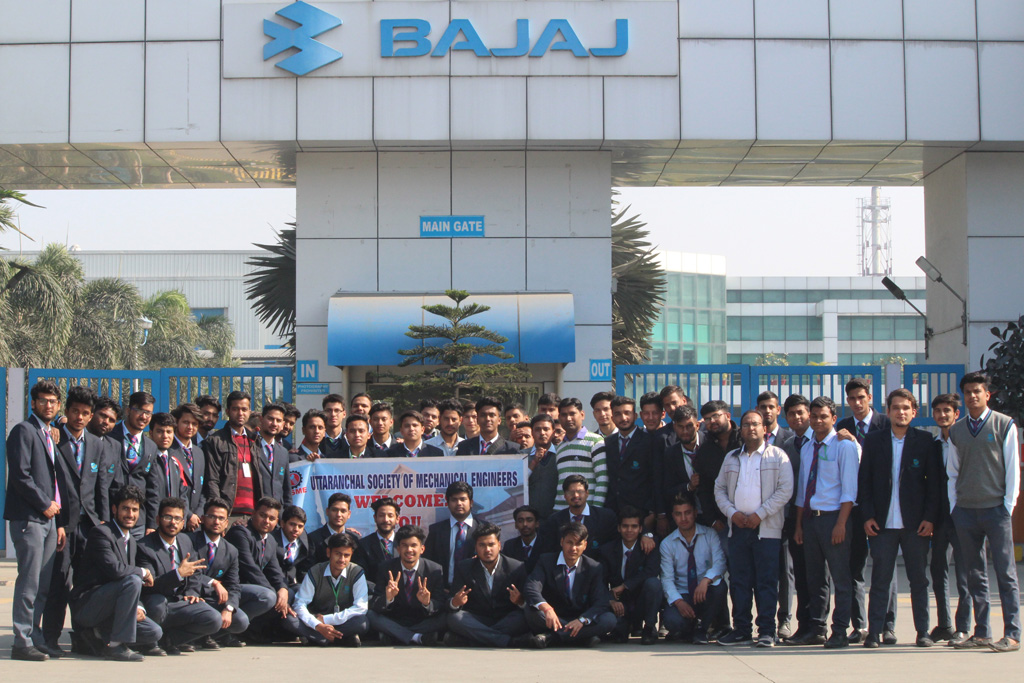 The students visited Bajaj Auto Ltd. on 22nd November, 2017. Bajaj Auto Ltd. Plant in Rudrapur is spread in an area of 270 acres, out of which 200 acres are with the ancillary companies. The Rudrapur Plant is the only plant of Bajaj outside Maharashtra and is one of the most advanced facility of Bajaj Auto Ltd. This plant is basically a two wheeler assembly unit of Bajaj Auto Ltd., assembling Bajaj Pulsar, Bajaj Discover, Bajaj CT100.

In the first lap the students accompanied by their faculty members were taken on a guided tour of the Plant. Students were informed about the company- its history, products and layout. As two wheelers were being assembled in the plant, the curiously awaited part of the visit was the segment where automated systems were being used. The manufacturing processes were limited to the Engine Assembly and assembly of Bajaj Pulsar 150 followed by vehicle testing. The shop floor was systematically organised for handling each component, even the aerial space was being used for the transport of one part from one place to another. Some of the processes required manual labour instead of automated robots as in the testing of the vehicles being assembled.

Students were exhilarated to see an assembly line working with automated robots. They learnt important considerations and gained practical knowledge of industrial engineering & hands-on understanding of the industrial handling and automated process.

The Industrial Visit was followed by an excursion to Bhimtal & Nainital on 22nd and 23rd November, 2017.

To sum up, the trip was a learning experience wherein the students were mesmerized by both human and divine creation.